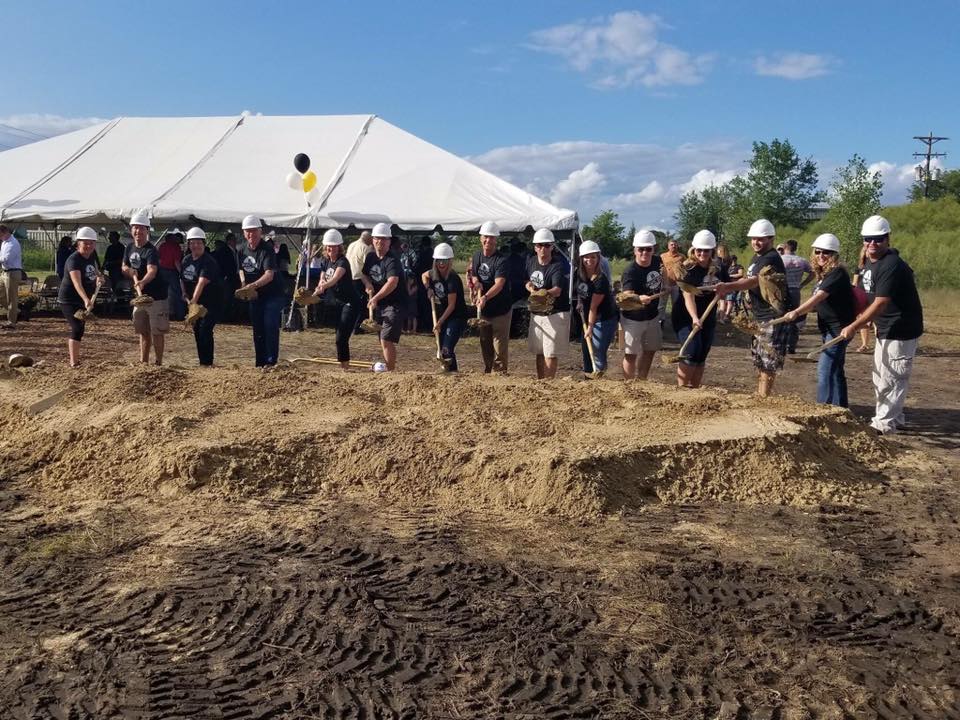 Like a lot of start-up breweries, the idea for Invictus grew out of a home brewing hobby gone rogue.  Our President, Previn Solberg had always been a craft beer fan and despite his desire to home brew, he found the hobby to be intimidating.  That is until 2013, when he met Troy Wolter when their kids were in the same kindergarten class and he found out that Troy had been home brewing for many years.  Troy invited Previn to his garage to brew a batch of beer and show him the ropes.  Previn was instantly hooked.  The two brewed several batches together and started developing their own recipes.

Fast forward several months, Previn started researching the craft beer industry.  He talked to other brewers, experts in the industry, read countless articles and started putting together a business plan.  He did this behind his wife's back until it got to the point where he either needed to stop dreaming or do something about it.  So, one evening, he decided to confess his scheme to his wife.  After a long discussion, she said "Let's do it" knowing that there was no turning back at that time.

Why the name Invictus?

Previn had a name picked out and if you ask him, it was a pretty awesome name.  But one afternoon, he and his friend Sam (also an investor) were driving in the car together and Sam said, "I got the perfect name for the brewery:  Invictus"  Lukewarm to the name, Previn had to really think about it (remember how awesome he though his name was?).  Sam pointed out that the word "Invictus" is Latin for "unconquerable" and is a poem written in 1875 by William Ernest Henley.  Sam also had fond memories of his grandfather referencing the poem when he was a kid giving the poem that much more meaning to him.

After reading the poem several times and fully understanding that the poem is a testament to the unconquerable human soul, Previn realized that Sam was right.  Invictus is a pretty sweet name.  Invictus Brewing Co. was born.

The name has become even more fitting to us with all the delays and challenges we've had just to get to the point of putting a shovel in the ground.  Previn was talking to his father, Loren, one day when things weren't looking so bright for the brewery's future.  They were talking about how difficult things have been and what we could do to overcome these challenges.  Then Loren says, "Well, I guess the name is fitting."  Yes, indeed it is.

Out of the night that covers me,
Black as the pit from pole to pole,
I thank whatever gods may be
For my unconquerable soul.

In the fell clutch of circumstance
I have not winced nor cried aloud.
Under the bludgeoning of chance
My head is bloody, but unbowed.

Beyond this place of wrath and tears
Looms but the Horror of the shade,
And yet the menace of the years
Finds, and shall find me, unafraid.

It matters not how strait the gate,
How charged with punishments the scroll,
I am the master of my fate:
I am the captain of my soul.

Invictus Brewing Co.’s mission is to produce high quality beers for adults to enjoy while also being good stewards of our earth and resources.

Blaine is a great place to live, one of the fastest growing cities in Minnesota and is known for its sports activities.  We are proud of our town and wanted to contribute to its economy, revitalization and attractions.  A brewery was the obvious next step.  Blaine is ready for craft beer.

Located adjacent to the National Sports Center that attracts more than 4 million people a year through multiple sports including soccer, hockey, lacrosse, baseball/softball, golf, ultimate frisbee, rugby, football and more, it just seemed like a natural fit to have beer along with our sports.

Our Philosophy on Beer

We believe that brewing beer is the ultimate combination of art and science.  On one hand, the art puts consideration into making beer that appeals to all 5 senses and leaves it open to interpretation and personal preferences.  On the other, the chemistry of the sugars, enzymes, alpha acids, minerals and countless other components must be strategically utilized to create that balance we are looking for as beer drinkers.

Our brewery will utilize the best of both worlds to create a variety of well-balanced beers.  We know that beer is a very personal thing and that everybody has their own tastes.  With that in mind, our philosophy is to create a wide variety of beers that appeal to all beer drinkers with a well-balance approach to our recipes.